Home » JGA Blogs and News » Honoring a Leader in our Profession

Honoring a Leader in our Profession 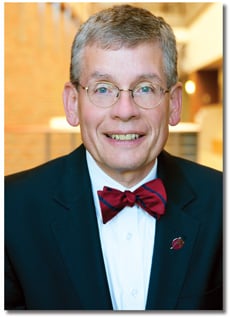 This is one of those occasions when a “blog” just doesn’t provide enough space to say why this is such a great honor and why it’s so appropriate. The Outstanding Fundraising Professional award is the highest honor that AFP bestows upon one of its members, recognizing effective, creative and stimulating leadership, as well as the practice and promotion of ethical fundraising.

Now in his 13th year as president of Augsburg University, we could share volumes on the way his work has made our work and that of so many so much better.

At JGA, we’ve had the honor of working with Paul for more than two decades at three different institutions. He knows how to make good advancement work occur from a technical viewpoint. He knows how to think strategically and even more importantly, understands when the strategic and the tactical blend seamlessly so that everyone… donors, staff, friends, know and feel that they are engaged in something that is larger than themselves. Paul does this in many ways. But perhaps the most impactful way, among many, is that he tells stories about what giving and voluntary action mean to all of us.

We’ve read his “Notes for the Reflective Practitioner” for more than 20 years (and you can see them on our website). We’ve heard him talk in campus settings, in churches, in front of boards and nonprofit voluntary groups about simple yet powerful moments in philanthropy. And, we’ve witnessed the results over decades. Wherever he has worked, there has been strong giving by many, often for the first time, to great causes. The results in recent years at Augsburg are one example.

Paul will be the first to tell you that this only happens when combined with the efforts and generosity of many others. True enough. But, if there is that one element but for which so much else would NOT have happened, then it is Paul’s work.

All of us at JGA are delighted to see Paul Pribbenow named the Outstanding Fundraising Professional of the Year in 2019.