Giving USA Foundation has released annual estimates of charitable giving for 2019, showing that giving reached more than $449 billion—including $64.11 billion, or 14%, to education—amid a strong economy. Giving USA 2020: The Annual Report on Philanthropy for 2019 reports Americans gave $449.64 billion in 2019. This marks the third year of growth with the highest giving levels ever seen—over $400 billion—driven by individuals as the largest source of charitable gifts. Total giving reflects an increase of 4.2% in current dollars and of 2.4% in inflation-adjusted dollars from 2018. These numbers demonstrate a robust pattern of giving, bolstered by a strong economy. 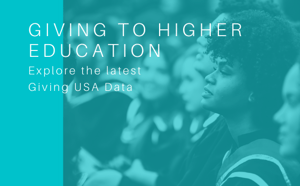 Key 2019 trends specific to giving to education were:

Deeper Analysis and Relevance for Colleges and Universities in 2020

Giving USA trends show that giving to the education sector, which includes colleges, universities, libraries, K-12 schools, and other education institutions, increased four of the past five years, including in 2019. Giving to education has been strongest in the last four five-year periods. The 2019 results occurred in context of a favorable environment for charitable giving, where economic strength underpinned very positive giving patterns and precedes potential challenges that may occur in 2020, considering economic, health, political, and social challenges.

Foundation gifts and large gifts to education grew significantly and heavily impacted positive higher education giving trends in 2019. While these gifts were made across all areas of the education subsector, they are well-represented in higher education. Some interesting points within the area of large foundation and major gifts include:

As markets shift in 2020 patterns with large foundation and individual donor gifts may also shift, though foundation giving trends tend to lag, so any negative effects may not be felt by that source until 2021.

Overall giving by alumni and non-alumni individuals continued to decline. Alumni support represented 22.6% of the total support in the academic fiscal year 2019, falling 7.9% from 2018. Yet, this still represents a significant constituency in terms of overall giving to higher education institutions. Donor Advised Fund giving also declined by 17.4%, but gifts from other organizations as a whole (including Donor Advised Funds, federated funds, and religious organizations) grew by 19.6%. Gifts by corporations also grew 1.0%.

In context of these trends and the current climate, consider taking these steps to maximize fundraising:

Primary source: Giving USA 2020: The Annual Report on Philanthropy for the Year 2019, published by Giving USA Foundation, a public service initiative of The Giving Institute, researched and written by the Indiana University Lilly Family School of Philanthropy.

previousCampaigning During a Crisis: How to Adjust and Plan
nextUtilizing Data to Guide Investments in Your Fundraising Program