Home » JGA Blogs and News » A Crisis Of Faith: The Ripple Effect of Declines in Giving to Religion

A Crisis Of Faith: The Ripple Effect of Declines in Giving to Religion

There is a multi-dimensional challenge facing churches in America that has me concerned, and I think you should be as well. Given my background, it should not surprise you that I am concerned about this matter. (Prior to joining JGA as a senior consultant, I spent twenty-five years working in development for a religious institution, and during my twelve years with JGA, I have worked with more than fifty faith-based organizations.) The challenge is related to several troubling trends in the current U.S. religious landscape. As I will explain later, I think you also should be concerned . . . whether or not your fundraising is for a religious-affiliated organization. 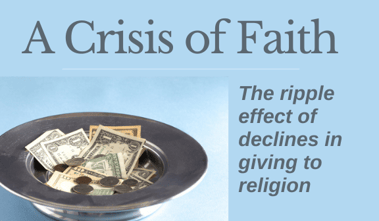 My concern is threefold: 1) Giving to religious organizations as a percentage of total philanthropy is declining substantially; 2) participation in congregations is at a historic low; and 3) the changed religious practices brought on by the COVID-19 pandemic could have a continuing, long-term impact on congregations.

According to the Giving USA 2020: The Annual Report on Philanthropy for 2019 report, while religious philanthropy, mostly to 350,000 congregations, totaled $128.17 billion in 2019, it increased only slightly (0.5% when adjusted for inflation) and lagged behind giving to other sectors. More importantly, as a percentage of total giving for the year, it was 29%, continuing a downward trend that has been underway for four decades. Giving to the religious sector accounted for 56.4% of the total philanthropic dollar in 1980-84. In 2015-19, it amounted to 30.5% of total giving – just over half of what it was in the 1980’s.

Religious participation is even more unsettling. One of the most – if not the most — comprehensive studies of the religious landscape is one conducted by the Pew Research Center. Its most recent report, The U.S. Religious Landscape Study, was published in in 2015. The report revealed that only half of Americans claim to belong to a specific congregation. The percentage who claim no religious affiliation – the “nones” – has grown from 5% in 1972 to 16% in 2007 to 23% in 2014. (A recent Pew update noted that this percentage rose to 26% in 2019.) The percentage of the Millennial generation who identify as “nones” is even higher – 35% in 2014 compared to 26% in 2007. Those congregations experiencing the greatest decrease in affiliation are Mainline Protestant and Roman Catholic while those seeing the greatest increase in membership are Muslim and Hindu congregations.

Many congregations today are not only dealing with decreased attendance and giving, but changes to their practices necessitated by the COVID-19 pandemic. In late June and early July of this year, the Lake Institute on Faith and Giving of the Indiana University Lilly Family School of Philanthropy, administered a congregational survey on the impact of COVID-19. The research, published as the COVID-19 Congregational Study in September, revealed that 86% of faith communities moved services online this year (only 31% had live streamed or recorded services prior to the pandemic). While 52% of the congregations have seen increased participation measured by viewers online, compared to in-person attendance at services prior to the pandemic, a common concern is whether the congregants will return to their churches, synagogues, and mosques post-pandemic or be content to participate virtually. Virtual participation appears to have had a negative impact on giving as congregational giving declined by 4.4% on average with 41% of congregations seeing a decrease in giving and 28% experiencing an increase. For many congregations there are significant implications for their worship, ministries, and programs if the COVID-19 practices become the new norm of religious participation.

So . . . why should you be concerned? How do these developments in the religious sector affect you if you are engaged in fundraising for a secular organization?

In addition to noting the critical role that faith-based organizations and institutions have played and continue to play in building and strengthening the fabric of American society, I point to the work done by Arthur C. Brooks, as reported in his 2006 book, Who Really Cares: The Surprising Truth about Compassionate Conservatism, for reasons for a collective concern about these challenging developments on the religious landscape.

In Who Really Cares, Dr. Brooks, a public policy expert, writes about who gives, who does not, and why it matters. He makes the point that the three strongest forces behind American charity are: 1) church attendance; 2) strong family life; and 3) opportunity to earn one’s own income. His research showed:

Why should you be concerned? Think about the ramifications of declining church attendance and giving for your organization based on these facts: a) greater church engagement leads to higher charitable giving in general; and b) people who attend church regularly give more generously and volunteer more frequently. As Sgt. Joe Friday would say, “Just the facts, ma’am (or sir). Just the facts.”