Home » JGA Blogs and News » Madam C.J. Walker and the AME Roots of Her Gospel of Giving

Madam C.J. Walker and the AME Roots of Her Gospel of Giving

We are pleased to offer this guest blog post by Tyrone McKinley Freeman, Ph.D. If you would like to learn more about Madam C.J. Walker and the tradition of Black philanthropy, listen to the webinar which we recently recorded with Dr. Freeman, Madam C.J. Walker’s Gospel of Giving: Insights on the Past, Present, and Future of African American Generosity.

In 1914, Walker told a local Indianapolis Freeman newspaper interviewer about the joy she experienced in giving to others. “She takes great stock in the theory that the Lord loves a cheerful giver,” observed the writer following their conversation. But Walker was not simply invoking II Corinthians 9:7, she was expressing deeply rooted convictions grounded in her faith commitment to the African Methodist Episcopal (AME) Church. In fact, Walker’s religious identity had a significant impact on her philanthropy. 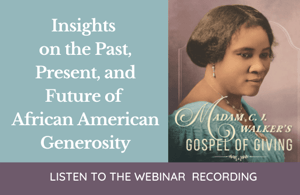 As I write in my book, Madam C.J. Walker’s Gospel of Giving: Black Women’s Philanthropy during Jim Crow (University of Illinois, 2020), the AME Church played a powerful role in the transformation story of how this Black woman rose from a southern cotton plantation to live a life of faith and generosity that continues to inspire 100 years later. Walker’s early experiences in the AME Church excited her moral imagination, and guided much of her philanthropy for the rest of her life.

Walker was born Sarah Breedlove in 1867 after Emancipation to a family that had been enslaved on a cotton plantation in Delta, LA. As Walker biographer and descendant A’Lelia Bundles has explained, the Breedloves were a Baptist family. As they toiled in the cotton fields, they found solace in the local Pollard Church pastored by Rev. Curtis Pollard, a Black state senator in Louisiana’s reconstructed government. Orphaned by age 7, Sarah moved to Vicksburg, MS, under the care of her older sister, and struggled for years as a washerwoman. Following the death of her first husband, Sarah fled to St. Louis in the late 1880s with her toddler, Lelia, in tow.

She quickly found comfort at St. Paul AME Church. For more than a decade, St. Paul’s had been receiving and supporting Black migrants heading westward out of the South in search of safety and opportunity. Sarah benefited from the church’s safety net of social programs through which her daughter gained access to school and she found friendship and inspiration. St. Paul’s opened up a new world for Sarah that was vastly different from her horrors in Delta. As a Black-owned international institution, the AME church was preaching the dignity of Black life, fighting Jim Crow, and building schools. It had a vibrant print culture, and conducted missions in faraway places Sarah could barely imagine. Its very existence openly defied racist myths about Black inferiority and immorality. Consequently, Sarah converted to AME and remained a devout member for the rest of her life.

Women in the AME church aided Sarah’s religious conversion and larger transformation. Jessie Batts Robinson was a local schoolteacher in St. Louis who led women’s groups within St. Paul’s. She led the church’s Mite Missionary Society through which women provided service to the arriving migrants. The group aided Sarah, and she observed its good works at large. They started an orphanage and an old folks’ home. They modeled respectability and activism as they challenged local white power structure through groups like the National Association of Colored Women (NACW) and the fraternal Order of the Court of Calanthe. Jessie became a lifelong friend and mentor to Sarah, and would eventually work for Walker’s Company, which she started a few years after leaving St. Louis in 1905 and adopting the name of her third husband, Charles Joseph Walker.

The example and impact of AME women like Jessie caused Madam Walker to later heap continuous donations on St. Paul’s Mite Missionary Society throughout her lifetime. In 1912, she told a newspaper that she gave to St. Louis in order to honor the “kindnesses” shown to her and her daughter while living there—a nod to the women of the church. Accordingly, she made estate plans to support the missionary society, other charities, and women, like Jessie, directly.

St. Paul’s not only supported Sarah through the most difficult portion of her life, but also provided her with opportunities for service. AME Church founder Richard Allen (1760-1831) had written that charity was “pure and disinterested, remote from all hopes or views of worldly return or recompence from the persons we relieve. We are to do good and lend, hoping for nothing again.” Following suit, Sarah the struggling migrant became Sarah the giver. After reading about a local elderly man with a blind sister and ill wife, she raised money and collected food to help them. “It was in St. Louis that [she] learned that it was truly her mission to relieve the poor and the distressed according as she was able,” the Indianapolis Freeman newspaper reported following an interview with Walker.

Such began Walker’s life of giving along the way, as she was able, rather than waiting until rich (Walker’s gospel of giving). She was grounded in Christian charity, racial uplift ideology, and Black women’s generosity as taught by her AME Church. Walker would go on to create and practice an expansive philanthropy that ranged from addressing the local needs of Black communities through the provision of food, social services, and education to activist and advocacy efforts to dismantle Jim Crow through the NAACP, the NACW and other national and international organizations.

Over time, Walker was also a member of Shorter Chapel AME in Denver, Bethel AME in Indianapolis, and Mother AME Zion in New York. She found her spiritual home in the AME Church with its teachings on charity and Black dignity, its activist stance in using the gospel of Christ to fight injustice, and its women who mentored her. Through it, she found nourishment for the sacred part of her that birthed a new vision for her own life and an agenda of service and uplift for Black women and people of color around the world. Her legacy continues today in the movements for Black Lives and racial and gender justice.

Tyrone McKinley Freeman, Ph.D. is author of Madam C.J. Walker’s Gospel of Giving: Black Women’s Philanthropy during Jim Crow (University of Illinois Pres, 2020). He is assistant professor of philanthropic studies and director of undergraduate programs at the IU Lilly Family School of Philanthropy. The book is available at a 30% discount at the Press website using the special code F20UIP until 12/31/2020.